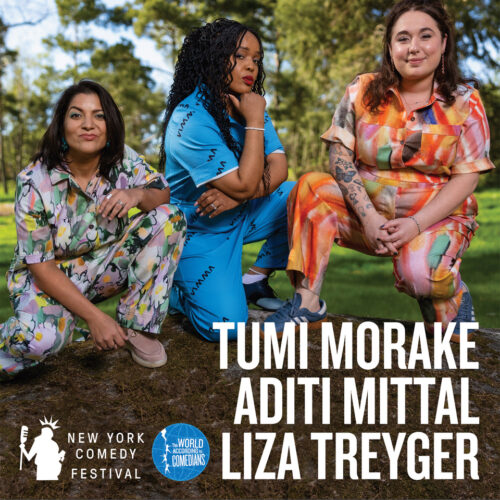 The World According to Comedians

Finland – a cold, sparsely populated country covered in darkness half of the year, with the most metal bands and coffee consumed per capita and a shared 800 mile border with Russia – is also the “happiest nation on earth” for the 5th year in a row according to a study by the United Nations.

In the spring, comedians Tumi Morake, Liza Treyger, and Aditi Mittal embarked on a hilarious road trip together throughout Finland to find out what the country’s recipe for happiness actually is. Come along for a gut-busting raucous night of comedy and find out precisely what makes this nordic country so happy…as well as so much more!

South African comedian, actress, TV personality, and writer Tumi Morake continues to be a formidable force in the male saturated comedy industry. Since beginning her career in smoky clubs in 2006, she has steadily grown into one of South Africa’s most sought after comedians, earning the title of South Africa’s First Lady of Comedy. The first woman to host Comedy Central Presents on African soil, Morake has become relentless in her quest to maintain her footing as a comedy tour de force.

Aditi Mittal is a comedian, writer, actor who can be found posting workout videos on Instagram, putting her foot in her mouth on Twitter and over sharing from her personal life on Facebook. Her first stand-up special “Things They Wouldn’t Let Me Say” is on Netflix, as well as her second special “Girl Meets Mic”. “Mother of Invention” her third show is a on Amazon Prime UK, AUS, and Next Up Comedy.

Liza Treyger is a New York based stand up comic by way of Chicago, raised in Skokie. She was born in the former soviet union and speaks Russian. Liza was most recently seen in the Judd Apatow movie King of Staten Island and HBO’s Pause w/Sam Jay. She has Netflix and Comedy Central half hour specials and has appeared on Late Night with Seth Meyers, Chelsea Lately, @midnight, Lights Out with David Spade, This is Not Happening and many more fun things. She is also the co-host of the podcast That’s Messed Up an SVU podcast and host of her own podcast Enemies.