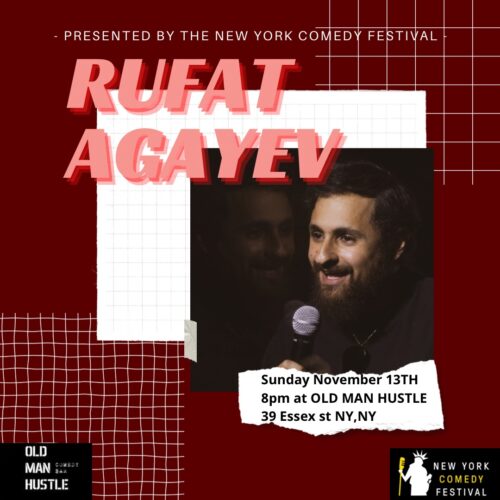 Rufat is a New York-based stand-up comedian, writer, and actor.

Rufat and his parents immigrated from Azerbaijan to the United States as refugees of war in the ‘90s. He quickly fell in love with hip-hop and started rapping as a teen. While attending Florida State University, he released music and opened up for big-name artists like Wiz Khalifa, Big Sean, and Mac Miller.

After moving to New York City to further his music career, he decided to try a different forum to tell his story: stand-up. Unsure where to start, he asked his friend from college, Kevin Barnett, a writer on Broad City, what to do. Barnett gave Rufat the link to a website run by a Russian guy that listed open mics in the city, and he’s been at it ever since.

Rufat was a finalist in New York’s Funniest at the New York Comedy Festival in 2019. He’s a featured writer in the book Alien Nation a collection of short stories from immigrants published by Harper Collins. You can see Rufat perform all over the country at clubs like The Comedy Cellar, colleges like NYU, and popular comedy shows like Don’t Tell. Rufat sure is glad to have taken his friend Kevin’s advice back in 2015 and started doing open mics.