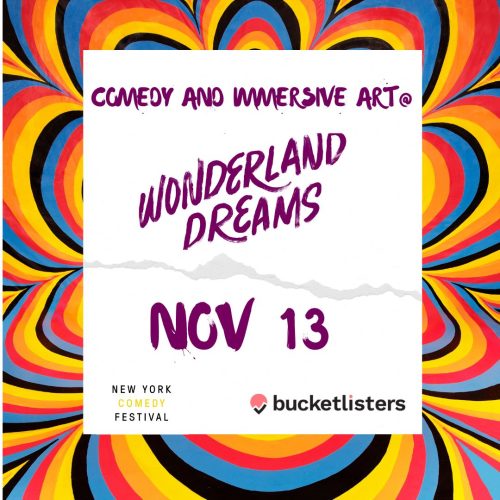 1 Free slice of pizza is included in your ticket and drinks are available for purchase. Drinks include curated wine options, Talea beer on tap, and an array of non-alcoholic beverages.

Talia di Napoli is not your typical frozen pizza brand. Their authentic Neapolitan pies are handmade in Naples, Italy by trained pizza chefs using the same pizza-making methods used by the inventors of pizza in the 1800s. With all-natural ingredients and a special freezing process that locks in that straight-out-of-the-woodburning oven freshness without added preservatives, you’ll swear you’re eating pizza in a Neapolitan pizzeria with every bite!

– Host: James Mattern: James is a Nationally Headlining Comic and Radio personality. James has appeared on programs including Fox Sports One’s “Garbage Time with Katie Nolan” The WWE Network’s “The List”, MSG Network “The Bracket”, and “” The Artie Lange Show.” and more!

– Caitlin Peluffo: Featured on The Late Show with Stephen Colbert, New York’s Funniest!, and Trial By Laughter, along with tons of Comedy Festivals around the US. Caitlin hosts a weekly podcast called Good Time Gal.

– Chanel Ali: Featured on the Starz series Night Train with Wyatt Cenac and Laff Mobb’s Laff Tracks on TruTV. In 2020, Chanel appeared in the CC Stand-Up/Refinery 29 series Taking the Stage and Speak Up and on the Netflix series Dash & Lily.

– Usama Siddiqee: Featured on Netlifx’s Inventing Anna, HBO’s And Just Like that, Comedy Central’s Nora from Queens, and FX’s Better Things. In addition, Usama was also on the 2020 season of America’s Got Talent.

– Zach Zimmerman: A rising star in NYC, Zach is the 2022 USA Today’s Comedian You Should Know, TimeOut’s New York Comic to Watch, and Vulture’s Comic to Follow. Zach was also published in The New Yorker, McSweeney’s, and The Washington Post; featured in New York Magazine, The New York Times, and Out.

Wonderland Dreams by Alexa Meade brings to life the story of Alice’s Adventures in Wonderland through boldly painted art installations, creating a whimsical world that plays with our perspective of art and reality. Fall down the rabbit hole into a world of secret rose gardens, mad tea parties, and a living gallery that puts you inside the frame.

Every inch of the massive 26,000 square-foot Wonderland Dreams exhibit is hand-painted, from the floors to the ceilings, using Alexa Meade’s signature 3D painting style which makes the world appear to be a 2D work of art. The exhibit has taken over a multi-floor flagship retail space on 5th Avenue and transformed it into a magical painted universe where you can truly lose yourself in the art. Travel through time and space as you wander a string of seemingly endless painted rooms that suspend reality and bring out the spirit of wonder and play.

At Wonderland Dreams there are no barriers between you and the artwork. In fact, you are an essential piece of art, bringing it to life as you become the subject and main character of the painting. Fall down the rabbit hole into a world of giant playing cards, secret rose gardens, and multicolored mushrooms. Make Wonderland your own as you assume the power of the Queen of Hearts by taking your seat on her throne. Ride a rocking horse in a golden field as the giant magical flowers bloom. Bask in the light of glowing lanterns as you become the Mad Hatter calling on those around you to join for Tea Time while surrounded by painted cakes of all shapes and sizes.