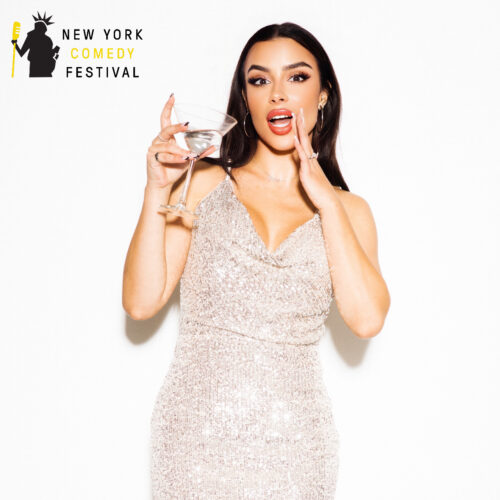 Direct from Austin, The Riff, with Host Nacya Marreiro is an improv stand-up comedy show where the audience chooses the topics!

Nacya Marreiro ( Na-see-ya Ma-ray-ro) is a stand up comedian and actress born and raised in the coastal city of Portimao, in the South of Portugal. From an early age, she developed a passion for entertainment by being the life of the party at family gatherings and through stage performances during school. At 21, she left Portugal to become an international flight attendant at a prestigious airline in the United Arab Emirates. While traveling the world she started performing stand-up comedy in diverse cities such as Abu Dhabi, New York City, Washington D.C, Dallas , Norway and Germany. Her unique style and flair on stage has grown from open mics into opening up for Whitney Cummings, April Macie, Adam Ray,Dane Cook and participating at Skankfest NYC 2017 and Skankfest Houston 2021. Nacya is also a trained actress, who’s been trained by the well-respected Juilliard alum and movie actress, Mona Lee and Carol Hickey Studio.She can be seen in commercials for Amazon and Omega XL as well as in sketch comedy shorts. Nacya currently lives between Austin,Texas (where she runs the popular comedy show called The Riff at the infamous Creek and the Cave, the success of this show has led to top comedians making guest appearances, such as Joe Rogan and Chris Redd) and New York, where she can be seen performing at The Stand and New York Comedy Club. Currently she is shooting as the lead of “Moving Valentine” a romantic comedy movie for Amazon Prime