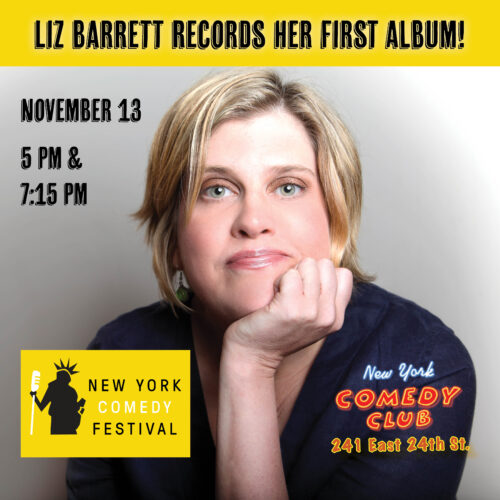 Join us as The New York Comedy Club & Pinch Records continue to record the funniest live albums in comedy.

Liz Barrett, the Queen of Deadpan, is recording her first album. Time Out New York said her signature brand is “dark and batty stand-up”. You’ll remember her one-liners long after you see her. Join her as she talks about everything including being married; gettin’ by; and hating hummus. She recently won the Brooklyn One Liner Madness Competition, and has appeared on Raw Dog Comedy on SiriusXM, AXS TV Gotham Comedy Live, Laughs on FOX, Lifetime, Funny or Die and New York Post Videos. She’s a regular at New York Comedy Club, Gotham Comedy Club, and Carolines, where she was a Breakout Artist. She travels all over the country and has appeared at numerous comedy festivals including Limestone; Women in Comedy; Red Clay; Rogue Island; and Laughing Skull.