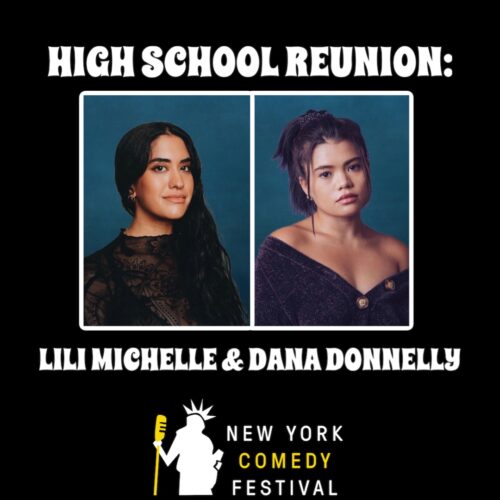 Lili Michelle is an NYC-based Iranian comedian originally from Toronto. She unfortunately roots for the Raptors. Lili was named one of The New York Comedy Festival’s 2021 ‘Comics to Watch.’ You can catch Lili on season 5 of HBOMax’s hit series, SEARCH PARTY. She has been featured as one of Vulture’s “Best Up and Coming Stand Ups” and has been on Sirius XM, Elite Daily, Buzzfeed, Vice, Huff Post, and Document Journal. You can find Lili online @lilsmichelle and at every bodega in New York buying Ketchup Chips.

Dana Donnelly is a Los Angeles-based writer, actor and self-proclaimed ‘crop top comedian.’ You may know her from her unhinged twitter, @danadonnelly, or from her even more unhinged twitter, @baddanadanabad. She’s been on TV (HBOMax, Freeform and Hulu), she’s written on TV (Freeform), and she owns two TVs (a Samsung and an LG). She recently performed standup on Arsenio Hall Live! at the Netflix is a Joke festival and hosts a man on the street series for OverheardLA. You can find Dana performing at clubs and theaters around Los Angeles, on Twitter, Instagram, or at your local Brandy Melville.