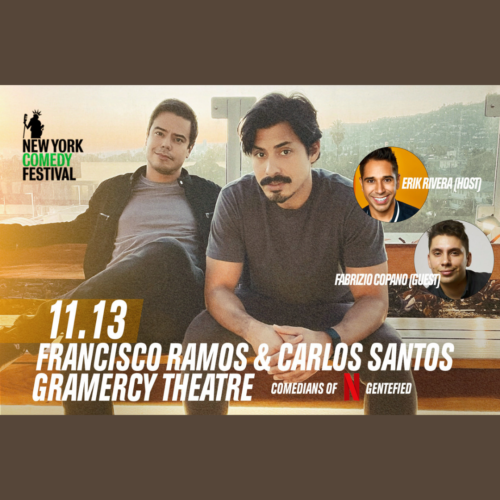 Come see some of the stars from the hit Netflix show “Genefied” LIVE at the Gramercy Theatre (limited VIP). Carlos Santos aka Chris: Carlos Santos is an actor/ writer/ host who can currently be seen as one of the lead Series Regulars in the Netflix dramedy series, GENTEFIED, for which he has been nominated for “Best Actor in Television” at the 2020 Imagen Awards, and in the supporting role of ‘Maurillio’, opposite Lil Rey Howery and Yvonne Orji in the upcoming FOX feature, VACATION FRIENDS. He has also been featured in roles on CBS’ 2 BROKE GIRLS, truTV’s ADAM RUINS EVERYTHING, and Seeso’s BAJILLION DOLLAR PROPERTIES. Francisco Ramos aka Felix: Francisco can be seen in the recurring character of Felix in the outstanding new show on Netflix – GENTEFIED. He was a top-ten finalist on Last Comic Standing and continues touring as a comedian across North America. Having made a noteworthy impact HBO presented an opportunity to shoot a standup special for “Entre Nos”. He continues to flourish as an actor and voice-over artist having created memorable characters in SHAMELESS, ANGIE TRIBECA & on Netflix’s LADY DYNAMITE.