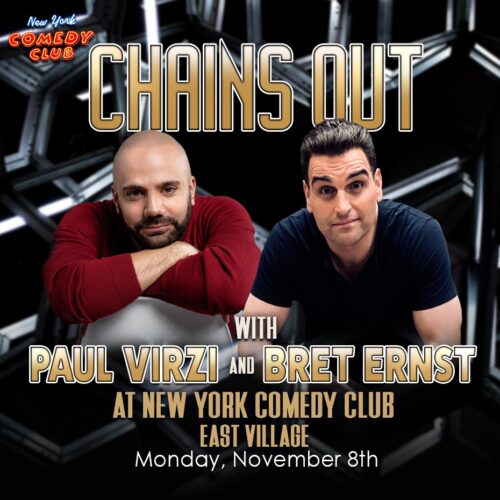 Chains Out with Paul Virzi and Bret Ernst

Paul Virzi is a stand up comedian and many of the nation’s top comedy clubs have called him one of the strongest on the rise! His debut hour long comedy special, Bill Burr Presents Paul Virzi: I’ll Say This debuted on Comedy Central in November and is available to stream now on CC.com. His comedy album Night At The Stand was #1 on iTunes and reached #4 on Billboard’s Top 100. He’s appeared on TruTV’s Comedy Knockout, AXS TV’s Gotham Comedy Live, The NFL Network’s Good Morning Football, and written for the ESPN ESPY Awards. Paul has made numerous appearances at the prestigious Just For Laughs Comedy Festival in Montreal and performed at the SXSW Festival in Austin, TX. Bret Ernst was one of four comedians featured in Wild West Comedy Show: 30 Days and 30 Nights – Hollywood to the Heartland, along with Ahmed Ahmed, John Caparulo, and Sebastian Maniscalco. Ernst has also appeared on the television programs Comedy Central Presents and The Late Late Show with Craig Ferguson. He appeared in the 2006 MTV wrestling show Wrestling Society X as a commentator. Bret was the host of the first season of Love Games: Bad Girls Need Love Too. He also appeared in Kesha’s “Blah Blah Blah” music video. His Comedy Central half-hour special was voted “TOP 5” of all of 2010, and his first comedy album “American Comic” was an instant success, breaking “TOP 10” on iTunes in its first week. Ernst is best known for his “Roller Skating Bit.” He currently plays Louie LaRusso Jr. on Cobra Kai, an American comedy-drama web series based on the hit 80’s movie The Karate Kid created by Robert Mark Kamen. The series premiered on May 2, 2018 on YouTube Red (now YouTube Premium). On March 8, 2018 he uploaded his one-hour standup special entitled ”Principal’s Office” onto YouTube for free. @paulvirzi @breternst