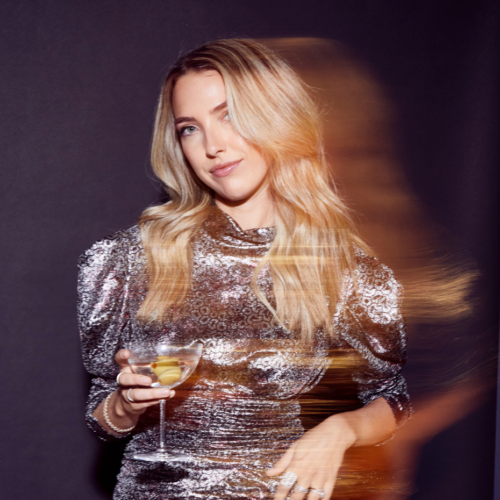 Jackie Schimmel is a podcast host, producer, writer, good time gal and professional asshole. A community college dropout, she had a wide array of temporary jobs until she took her first foray into web design and doctored a fake diploma from UCLA which landed her a coveted receptionist position at prominent investment bank. In 2012, disgruntled by her day job, Schimmel started blog “The Bitch Bible” that acted as an aggressive public diary cataloging her grievances with the world.

The blog was discovered by executives at “Watch What Happens Live” and Jackie was booked as a bartender on the show. After faking food poisoning to appear on live television across the country, Jackie was fired from her acclaimed receptionist job and simultaneously offered a podcast development deal with Embassy Row Productions.

Primarily a solo podcaster, past guests include everyone from Cardi B to Michael Rappaport. Without the help of family connections, formal training, agents, managers or publicists, Schimmel has propelled her podcast “The Bitch Bible” from an experimental hobby to a top comedy podcast. Relying solely on intuition, loose morals, and ignoring industry professionals, Jackie catapulted to the top of the charts where she has since resided weekly.

In early 2020, “The Bitch Bible” hit the road with a sold out live podcast tour concluding in Dallas at the Bomb Factory with an audience of 1,500 people. Jackie Schimmel has had television production deals with Sony Television, CBS Studios and NBC Universal. She was the host of E! Entertainment’s digital series “What the Fashion!” as well as developing, hosting and producing a reboot pilot of “Fashion Emergency” that didn’t get greenlit. Their fucking loss. Jackie Schimmel is represented by Creative Artists Agency and 3 Arts Entertainment. And just remember, you will always roll a gimmel when you bet on Jackie Schimmel.